"Those who believe in God know that evil and death do not have the final say." 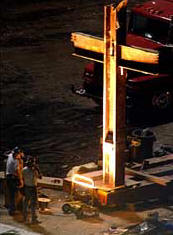 Posted by Gen X Revert at 12:01 AM No comments:
Labels: islam

"In a chilling parallel to the Madrid train bombings, Muslim fanatics linked to al Qaeda set off a huge car bomb yesterday outside the Australian Embassy in Jakarta, killing nine people and wounding 182."

I used to support the Palestinians and still consider Israel to be illegally taking the land they lived on for centuries. However, when Palestinians danced in the streets on September 11th, any support I had for them disappeared completely. Now, I consider them to be just like any other muslims terrorists.

"On Sunday, Channel One showed the detainee looking frightened as he was manhandled by masked law enforcement officers and swearing to Allah that he didn't shoot women and children."

Doesn't matter dude, even though I am sure he is lying. The death penalty is justifiable in this case and hope that it is painful and broadcast to all the muslim nations.

"Interfax said the alleged leader of the hostage-takers, an ethnic Ingush named Magomed Yevloyev, had not been found among the dead. Yevloyev is believed to be the leader of the strict Wahhabi sect of Muslims in Ingushetia."

"A Long Island Marine who was a star football player at Chaminade HS and the Naval Academy was killed by a roadside bomb while guarding convoys in Iraq, his family said yesterday.
Lt. Ronald Winchester, 25, who had 93 people under his command, was only eight days into his second tour of duty in Iraq when he was killed Friday, his father said. "

Posted by Gen X Revert at 8:25 AM No comments:
Labels: Long Island Stuff

It is almost that time of the year again when we remember when followers of the heresy of islam slaughtered thousands of innocent people in this country. Hopefully it will not be difficult to find a Catholic Mass offered for the hundreds of Catholics killed on September 11th.

Posted by Gen X Revert at 3:18 PM No comments:
Labels: islam
Finally, a newspaper publishes the truth about terrorism in today's world:

"It is a certain fact that not all Muslims are terrorists, but it is equally certain, and exceptionally painful, that almost all terrorists are Muslims."

"The hostage-takers of children in Beslan, North Ossetia, were Muslims. The other hostage-takers and subsequent murderers of the Nepalese chefs and workers in Iraq were also Muslims. Those involved in rape and murder in Darfur, Sudan, are Muslims, with other Muslims chosen to be their victims.
Those responsible for the attacks on residential towers in Riyadh and Khobar were Muslims. The two women who crashed two airliners last week were also Muslims.
Bin Laden is a Muslim. The majority of those who manned the suicide bombings against buses, vehicles, schools, houses and buildings, all over the world, were Muslim."


This writing must be from a right-wing Christian paper right? No, it is from the pan-Arabic newspaper Al-Sharq Al-Awsat.

"An extremist Islamic cleric based in Britain said yesterday that he would support hostage-taking at British schools if carried out by terrorists with a just cause."

Does this surprise anyone? Just a reminder: you can read all about islam in the great Hilaire Belloc book: The Great Heresies