From the Long Island Catholic:

"As new reports of Hindu extremists attacking Catholics reach the U.S., Indian priests serving on Long Island are hoping that U.S. Catholics and other Christians will become aware and vocal in defending their fellow Christians in India.
According to Catholic News Service reports and information from a Web site of the Indian bishops, about 60 Christians have been killed, 300 villages have been destroyed, 50,000 people are left homeless, more than 18,000 have been injured, including priests and nuns, two women were gang raped, and more than 150 churches and other church facilities have already been destroyed while still more were vandalized or desecrated.“It is terribly troubling,” said Father Augustine Fernando, associate pastor of St. Kilian’s Church in Farmingdale and a native of India. He has been in touch with priests from his home diocese and has gotten information from a Web site of the Indian bishops’ conference. He is hoping that Americans will become aware and raise their voices."

One of the causes of the violence may the fear of losing out to Christianity:

"There has been a surge of Indians who have joined the Catholic and other Christian Churches, Father Sabhasundar said, but he denies that the Catholic Church has made any special effort to draw Hindus. Rather, the Catholic Church and other Christians offer health and other services to people of all faiths.“They find dignity and equal-ity in Christianity,” Father Sabhasundar said, and many are drawn to the teachings of Jesus. This is particularly true of “outcasts,” those who are excluded from the traditional Hindu caste system."

Posted by Gen X Revert at 7:22 PM No comments: Links to this post
Labels: Church Stuff, Crime and Justice

For those who have never seen my Gen X Catholic poem ala Allen Ginsberg, here it is:

I saw the best Catholics of my generation destroyed by madness, starving
hysterical naked,
dragging themselves through the streets at dawn looking for beautiful Liturgy

Coolheaded hipsters burning for the ancient heavenly connection to the
Trinity,
Who passed through universities without ever learning Aquinas, among the scholars of Kung,
who were expelled from the seminary for questioning heterodoxy,
who cowered in rooms with no crucifixes, burning their Missals in
wastebaskets and listening to the Feminist Theology through the wall,
who got busted in their dorms reading Wojtyla,
who purgatoried their torsos night after night
with endless tales of bitter old nuns,
who chained themselves to altar rails for the timeless reception of the Eucharist,

who sank all night in submarine light of renovated Churches, listening to the
crack of doom from the folk group,
a lost battalion of Thomistic conversationalists,
screaming whispering facts and memories and
anecdotes of lecher priests, pedophiles, perverts
whole intellects who vanished into nowhere leaving a trail of missed vocations,
who wandered around and around at midnight wondering where to go for Adoration, and went, leaving no broken hearts,
who studied Newman,Stein, St. John of the Cross
because the teachers would forbid it,
who loned it through the streets of Georgetown seeking visionary angels like Fessio
who lounged hungry and lonesome through USF seeking Chesterton or Augustine or
Waugh, and followed the brilliant Spaniard to converse about Opus Dei
who disappeared into the Traditionalist groups,
who reappeared on the Florida Coast building Ave Maria
with big pacifist eyes sexy in their dark skin passing out Catholics United for the Faith leaflets,
who kneeled for communion and shrieked with delight for
committing no crime but their own desire for orthodoxy

who journeyed to Denver, who prayed With Chaput,
& waited in vain, for the New Evangelization

who threw potato salad at Jesuit lecturers on Dogma and subsequently
presented themselves on the granite steps of Groeschel’s Friary with
shaven heads demanding true religious life.

What sphinx of cement and aluminum bashed open their skulls and ate up
their brains and imagination?
Moloch! Heterodoxy! Filth! Ugliness! Bare Churches and stupid theology! Boys sobbing childhood molestation
Moloch! Moloch! Nightmare of Moloch! Moloch the heavy judger of orthodox seminarians!
Moloch the incomprehensible dissidents! Moloch the soulless Liturgies! Moloch whose church buildings are empty!
Moloch whose love is endless questioning and changing! Moloch whose soul is America and National Catholic Reporter!
Posted by Gen X Revert at 9:15 PM No comments: Links to this post
Labels: Church Stuff, Humor 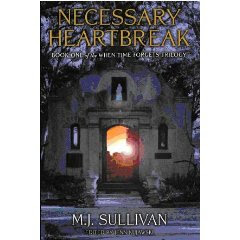 Necessary Heartbreak
Product Description
Do you believe that time heals all wounds? Michael Stewart doesn't. Twelve years later, he's still struggling with the demands of being a single father. His life revolves around his daughter Elizabeth, a precocious girl who's growing up much too fast. Michael is all too aware of time lost, and time still slipping away. But fate, or perhaps something more divine, has other plans for Michael. When he and Lizzie stumble upon a root-cellar door in the floor of an old church, they discover that it's actually a tunnel leading back in time to first century Jerusalem during the tumultuous last week of Christ's life. With the help of Leah, a newfound friend, they try desperately to escape, avoiding menacing soldiers at every turn, including one determined to make Elizabeth his own. Trapped in the past -- both literally and figuratively -- Michael comes face to face with some of his most limiting beliefs, and realizes he must open himself up to the possibility of a deeper faith in God, people, himself, and love before he can find his way home. Michael Sullivan is the author of several books for young readers. He lives on Long Island with his wife and two daughters.
I was sent a copy of this book by the author, who happens to be a fellow Long Island Catholic. I advised the author, M.J. Sullivan that I do not read fiction, something my wife, a former adjunct English Lit professor tells me I should do. I am glad he sent the book to me as I enjoyed it. This was a quick and interesting read about a Long Island father and daughter that find themselves in Israel at the time of Jesus. The story moves quickly and I found it was not easy to put the book down. The author is a sports writer who has written books for young readers about Chris Mullin (St. John's University basketball star) and Darryl Strawberry ('86 Met!) and others.
Posted by Gen X Revert at 8:38 PM No comments: Links to this post
Labels: Catholic books, Long Island Stuff
Newer Posts Older Posts Home
Subscribe to: Posts (Atom)