I attended the first part of this great conference at the Nassau Community College Center for Catholic Studies today. As the picture below attests, it was a good turnout for which I am happy. Professor Varacalli always does an excellent job with these events and they are well worth the time and all Catholics in the area should try to attend. 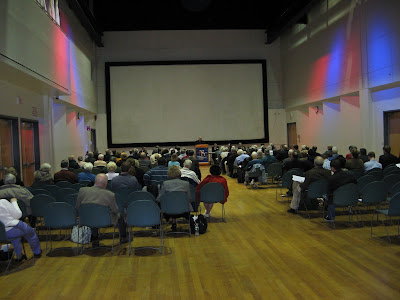 I had to leave early and took this picture on my way out the door. It shows Michael Novak at the podium during the discussion period.

The conference started out with the traditional huge feast featuring various heroes, salads, several trays of baked ziti and cake. The Center for Catholic Studies always feeds the mind and body! I purchased 3 books after stuffing my face: Business As A Calling by Michael Novak, Economics for Helen by Hilaire Belloc, and The Catholic Milieu by Thomas Storck. I was able to get two of these books signed by the authors. (Mr. Belloc was unable to attend, although he was definitely there in spirit.) After the lunch we all headed downstairs and heard brief tributes to 3 Catholic scholars who have recently passed away:

Dr. Charles M.A. Clark began by noting the irony that he taught at the nation's largest Catholic University and yet it was a secular community college that had a great Center for Catholic Studies. Dr. Clark pointed out how Catholic Social Thought is not economic theory but moral theology. He contrasted Catholic Social Thought (necessarily social) with neoclassical economics (individualistic) and cautioned that self-interest (greed) as the ultimate value eats away at public virtue. A great point he made in my opinion, is that capitalism works in Europe and America because it is able to take advantage of the self-control and value systems which come from the Christian culture that nurtured these areas for centuries. Once that Christian culture is gone, and it is going, watch out....

Next up was Michael Novak who spoke of wealth being created by the minds of people. It was the ideas and the American value of invention and entrepreneurship that grows wealth. He pointed out the positive value of capitalism as lifting so many people up from poverty in just a couple hundred years.

Last to speak was Thomas Storck who gave a very interesting presentation on Distributism. This system was the creation of Hilaire Belloc and G. K. Chesterton who based their ideas on Rerum Novarum. In a nutshell, distributism means property is distributed to as many people as possible. It focuses on small businesses and advocates large entities being employee owned. Belloc pointed out the danger of making money from things other than actually producing or working. This increases interest in the wealth itself and decreases interest in the product or work itself.

All of the presentations had some interesting points. I was unable to stay for the discussion period and the final statements as well as the response of Dr. Stephen Krason on solidarism. Even though I only witnessed the first part of the program, it gave me plenty to think about. After I got home, I noticed on The ChesterBelloc Mandate blog that several people from The Society for Distributism were attending so I missed the opportunity to meet them. Well, hopefully I will have the chance at another event. The Society may post the video of the talks on their website which would be awesome. It would be great to have a transcript of the talks and debates. Even though I only heard the opening parts, it was a lot to digest.

I hope nobody minds if I post these pictures I took: 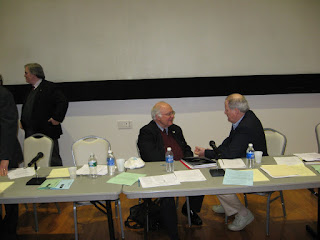 Michael Novak speaking with a retired economics professor I met - George Frost, Dr. Clark is on the left 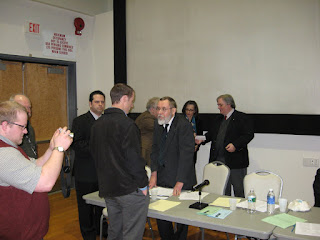 Who: All are invited, free of any charge, but registration is required.
What: A conference on the topic of the compatibility of the Catholic vision with three economic systems: "democratic socialism," "democratic capitalism," and "distributism." The conference features scholarly presentations, intellectual exchanges, and summary statements on the three systems and a final reflection on the conference from the perspective of Heinrich Pesch and Solidarism.

All attendees must register with Nassau Community College, Office of Lifelong Learning, One Education Drive, Garden City, New York, 11530 (phone 1-516-572-7472). A parking permit will be mailed to you. Attendees should be aware that failure to display a permit on the inside window ledge of your vehicle or otherwise parking illegally could result in a parking ticket being issued to you.

"My advice to my pro-life friends is the same advice my mother offered to me as a child: Watch your language. Calling people “baby killers” or the “anti-Christ” probably isn’t going to persuade them of the rightness of our position. Instead, it makes them less likely to listen and weakens our credibility as pro-life ambassadors. Be conscious of your words. Are they angry, vindictive, mean-spirited? Remember that if you send them out in an e-mail they will travel quickly all over the globe and reach people you don’t even know. Is this the face you want others to see? "

This column by Kathleen Gallagher points out some of the weird and discouraging things I have read within the Catholic blogosphere over the past year. I have enjoyed reading and commenting and blogging for over 6 years now but temporarily lost almost all interest due to the incessant political commentary that made me wonder about St. Blog's. I have read on Catholic blogs that Barack Obama is a "terrorist", a "baby killer", and a "communist". I have seen him imagined as another Hitler and another Castro and even the Anti-Christ. I think this Column hits the nail on the head. If I, a pro-life, orthodox Catholic who is very much a Catholic blogosphere 'fan' am weirded out by the shrill tone of the writing, how do you think others with different outlooks perceive the writing?
Posted by Gen X Revert at 8:31 PM No comments: Links to this post
Labels: Blog Stuff
Newer Posts Older Posts Home
Subscribe to: Posts (Atom)