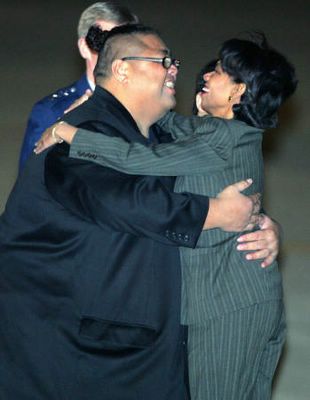 Think Colin Powell had to do this?
Posted by Gen X Revert at 9:22 AM No comments:
Labels: islam
I don't think this is true -

According to Newsday, Fr. Tom Hartman built Telecare into the "nation's largest producer of original Catholic television programming". I would think that would be EWTN. Much of what is on Telecare, the Diocese of Rockville Centre's television station, is not specifically Catholic. For example, weatherman Dr. Frank Field hosts a health show. There is a show on Judaism and one on Islam. There are several community and values based shows that you can find on other stations. They also show local high school sports and usually have EWTN programming overnight. If you check out the "about Telecare" link on the station's website, it does not mention "Catholic" at all, just "ecumenical programming".
Posted by Gen X Revert at 8:27 AM No comments:
Labels: Diocese of Rockville Centre

K Lo at Chaminade and no one told me?
Posted by Gen X Revert at 6:04 PM No comments:
Labels: Diocese of Rockville Centre
Newer Posts Older Posts Home
Subscribe to: Posts (Atom)