Last night I attended the talk entitled "Anglicans Looking To Rome: 1570 - Present" at Nassau Community College's Center for Catholic Studies. The speaker, Msgr. Daniel S. Hamilton, works as the editor of The Link, the newsletter of the "Pastoral Provision-USA". Now retired, Msgr. Hamilton was pastor of Our Lady of Perpetual Help in Lindenhurst, former editor of The Long Island Catholic (and Q & A columnist) and was also chairman of the Rockville Centre Diocesan Ecumenical Commission. While serving as editor of The Long Island Catholic, Msgr. resided at St. William the Abbott Church in Seaford, where he sometimes 'volunteered' me to serve his quick private Mass before dashing off to work. We altar boys called him "Superman" because he had jet black hair that was slicked back, wore black glasses, was editor of a newspaper and bore a striking resemblance to Clark Kent. Check out his article from America Magazine from 1993 Knocking on the Papal Door, in which he called for a "special geographical prelature" for Anglicans although it will probably "draw sharp criticism from those Catholics who want their own church to take the same doctrinal position that official Anglicanism has already taken or is now taking".

Msgr. Hamilton's talk was a scholarly summary of the history of Anglicans looking to Rome starting with 1570 when Elizabeth I was excommunicated by Pope Pius V, although there was not much said about the period from 1570 to the Oxford Movement of the 1800's. A question and answer session followed the talk, which proved very interesting.


"The Rev Taylor, whose children's book Shadowmancer became an international best-seller, said he was turning instead to the Roman Catholic church, which he believes is less afraid to stand up for important moral issues. "

Taylor is a former Anglican priest who says some pretty harsh things about the Church of England in the linked article. Anglicans entering the Catholic Church is a hot topic since Pope Benedict issued the Apostolic Constitution allowing for corporate reception of Anglicans, something we have had since 1980 in the US under the "Pastoral Provision".
Posted by Gen X Revert at 9:42 PM No comments:
Labels: Catholic Event, Center for Catholic Studies, Church Stuff, Diocese of Rockville Centre

Reminder for this Friday night:

For the person who ended up on my blog searching for "Is Scott Hahn sedevacantist", the answer is no.
Posted by Gen X Revert at 9:24 PM No comments:
Labels: Church Stuff
St. Ladislaus Church

I finally was able to get to the traditional latin Mass (the extraordinary form) for the first time since it moved to St. Ladislaus Church in Hempstead. This is a beautiful Church with some nice paintings on the walls and ceilings. It is a heavily Polish parish so there was an icon of Our Lady of Czestochowa and a plaque on the outside of the Church featuring Pope John Paul II. Here is a picture of the JPII plaque, which dates from the Jubilee Year and commemorates 2,000 years of Christianity. It pictures JPII holding his staff outward in blessing the crowd, as he did in Poland. (click to enlarge) 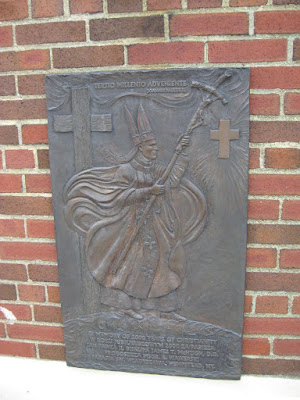