"A university student from Egypt was ordered held without bond after prosecutors said they found a pilot's uniform, chart of Memphis International Airport and a DVD titled "How an Airline Captain Should Look and Act" in his apartment.

The FBI is investigating whether Mahmoud Maawad, 29, had any connection to terrorists. He is awaiting trial on charges of wire fraud and fraudulent use of a Social Security number.

Maawad, who is in the United States illegally, told the judge during a hearing Thursday that he is studying science and economics at the University of Memphis."


Why isn't this story being given greater coverage? How soon we forget September 11th.
Posted by Gen X Revert at 8:22 AM No comments:
Labels: islam
Priest Pricks Children With Pin

"The Catholic Diocese of Austin is investigating after a priest called about 15 children to come forward during evening Mass so he could prick them with an unsterilized pin to demonstrate the pain Jesus suffered during crucifixion. "

"What I was trying to teach them is that suffering is a part of life," said the Rev. Arthur Michalka, 78, on Friday. "

The new Chairman of the House Homeland Security Committee is a fellow parishioner of mine. I hope he remembers I "made his day" when I bumped into him at Dunkin Donuts!
Posted by Gen X Revert at 11:29 PM No comments:
Labels: islam
Remember the fuss over Michael S. Rose's Goodbye, Good Men!? It seems that the bestseller was read by some important people because the questions of the visitation of the seminaries seem like they are in line with the book's premise. Via Rocco at Whispers in the Loggia. I especially like the part that says all priest-graduates of the past three years are to be interviewed. These priests may be more open to telling the whole truth if they don't have to worry about getting to graduation.
Posted by Gen X Revert at 11:23 PM No comments:
Labels: Church Stuff

From strivingforholiness in my comment box - "One of the seminarians you linked to several weeks ago, Matty Molnar, was killed in a car accident last night..three other seminarians were also hurt, one in critical condition. Please pray for Matty's soul, his family and friends and the other young men who were injured..."

The media seems to have forgotten about Ken Carney, Tom Diasparra, and Phil Sofia, the 3 jocks from Mepham High School who abused other boys in a football camp. There has been no reports on the status of their "punishment", whether they are free, or whether they are back on Long Island. Here is a copy of the Grand Jury report that describes in detail what they did while other football players watched and laughed. DO NOT click if you have a weak stomach!!

Here is the Newsday archive of Mepham High School stories, although Newsday does not print the names of the 3 . My concern is not just where are these guys but has anything really changed?? Do schools monitor anything better than they did before this incident? Will the next football players to sodomize or beat get the community support as these jocks did (at first) or will the town actually see them as criminals to be punished? Do coaches get supervised any better today, either here on Long Island or elsewhere? Are there still people out there that see (men's) sports as so important that it takes precedence over education?

Here is some good commentary from Don McPherson who leads the Sports Leadership Institute:

"...Long Islanders are far too familiar with the case of three boys being sodomized by their teammates at Mepham High School in what people continue to call a "hazing" ritual. The fact is, these boys were not being "hazed," they were being sodomized. However, this difficult word and our inability to confront the "football machine" have distracted us from dealing with the reality of the problem."
Posted by Gen X Revert at 9:24 PM No comments:
Labels: Long Island Stuff
More thoughts on Mother Angelica, EWTN, and Catholic broadcasting from my reading of Raymond Arroyo's new book-

Mother Angelica fought hard to keep the bishops from controlling EWTN. For awhile the bishops and EWTN tried to work together, with the bishops producing programming and EWTN airing them, but EWTN rejected much of what the bishops had to offer. The bishop's conference wants to make ecumenical programming, and programming that presents all sides of an issue of Catholicism. The result is watered down and pretty much useless for anyone wanting to learn Catholicism, or for anyone wanting to devote their life to becoming a saint. EWTN wants to present Catholicism to those who wish to learn and those who want the whole teaching without dissent or question. You can argue with style and approach to Catholic programming, but I can see what the bishops would have done to EWTN had they had their way because of the local television station of this Diocese, Telecare. Telecare bills itself as "ecumenical programming" and they don't show too many Catholic programs. It does have local Mass, including Masses in Spanish, which are important. But overall, the network does not see its mission as teaching, defending or promoting Catholicism. I don't like any of their programming and when I see Frank Field, a local weatherman, doing a show on health, I wonder why Telecare is airing this?? Basically I see Telecare as a waste of money and I think it would be better for the diocese to produce a few hours of weekly programming that is Catholic and of local interest and show EWTN the rest of the time. Show the spanish Mass, the Mass from St. Agnes, Bishop Murphy's show, the Good News show that highlights stuff around the Diocese and leave the rest to EWTN.
Posted by Gen X Revert at 8:56 PM No comments:
Labels: Catholic books 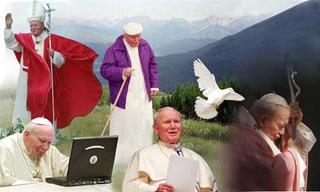 I have been using Hello to post pictures on my blog for awhile, but I just noticed there is a button to post pics right from blogger.
Posted by Gen X Revert at 12:42 AM No comments:
Labels: Blog Stuff

The hits I am receiving for "Caterina Bonci" are amazing. This is the Catholic school religion teacher claiming she was fired for being too sexy. I posted about this because I thought it would be funny to paraphrase the "I'm too sexy" song. I didn't think it would result in dozens of hits every day. Geez, guys get a grip - follow the link for a pic and get over it already.
Posted by Gen X Revert at 6:06 PM No comments:
Labels: Blog Stuff

Rebecca at Doxology asks for blogs of reverts (yah!) and converts. Thanks to my Catholic Blog Directory I can list some converts - additions and corrections welcome:

martha, martha… - Penni
Fructus Ventris - Alicia
The Curt Jester - Jeff Miller
Posted by Gen X Revert at 11:24 PM No comments:
Labels: Blog Stuff
Yesterday I went to the Friends of EWTN conference at Kellenberg Memorial High School. Fr. Pacwa and Fr. Mullady each gave a talk. Then Fr. Pacwa spoke a bit on Mother Angelica and EWTN. He had a galley (sp?) copy of Raymond Arroyo's new book - Mother Angelica The Remarkable Story of a Nun, Her Nerve, and a Network of Miracles and talked about much that was in the book. It was so interested that I stopped at Barnes & Noble on the way home and purchased a copy. Some interesting things from reading some of the book, not all:

I went to the traditional latin Mass today, and the Gospel was "the greatest commandment" quoted above. The Gospel at the N.O. Masses today was "Forgive thy enemies", both of these messages were tough ones for September 11th.
Posted by Gen X Revert at 9:48 PM No comments:
Labels: Church Stuff
Sept. 11: Four Years Later
In 2003 I blogged a list of Long Islanders killed on September 11th. My all those killed by terrorists rest in peace.
Posted by Gen X Revert at 7:21 AM No comments:
Labels: islam
Newer Posts Older Posts Home
Subscribe to: Posts (Atom)