HICKSVILLE — Bishop William Murphy looked out at several hundred men filling the auditorium for the diocesan Catholic Men’s Conference last Saturday and exclaimed: “If you could only see what I see.

“There are men from all parishes of the diocese and all different backgrounds,” Bishop Murphy said. At the sight of so many men so serious about their faith, the bishop noted, “I get pumped.”

The congregation at the closing Mass in the auditorium of Holy Trinity Diocesan High School here roared in response with their own enthusiasm for the daylong conference. More than 800 men attended the conference, which had the theme “You Have What It Takes.”


The above link is to the Long Island Catholic article on the Catholic Men's Conference I attended. The huge turnout is an indication that just this sort of thing was needed in this Diocese. I look forward to next year's event and hope they can line up some good speakers again.
Posted by Gen X Revert at 9:58 PM No comments: Links to this post
Labels: Diocese of Rockville Centre

The Catholic Men's Conference was very good. It was very well organized and very well attended. There must have beeen 700 men there or more. The speakers were all good, Msgr. Lisante was probably the standout. Fr. Joseph Fitzgerald was the emcee and Bishop Libasci welcomed us men. Brother Louis Leonelli, CFR led off speaking of his conversion experience from pagan to Catholic. He will be ordained in two weeks for the Franciscan Friars of the Renewal. There was a short video from Coach Mike Krzyzewski, the basketball coach at Duke. This video was made possible thanks to Fr. Fitzgerald meeting Coach K at the Olympics - Fr. Fitzgerald was on the USA Olympic European Handball team. Then it was time for another basketball coach, Lou Carnesecca, the legendary coach from St. John's to give a short talk that was well received. Msgr. Lisante gave the best talk, although I had a bit of it before at Faith on Tap. He spoke on the beauty of sex and how men needed to eliminate porn and extra-marital affairs from their lives. Mark Bavaro, former NY Giant, was surprisingly good and very honest in describing his faith as not quite as on fire as it was in his earlier years. He was there to promote his new book, Rough and Tumble which is a novel. The Detective Stephen McDonald gave a moving talk on forgiveness and led us all in a decade of the Rosary. Throughout the day there was Eucharistic Adoration, Confessions, and vendors at various tables selling some good stuff. I bought The Virtue Driven Life by Fr. Benedict Groeschel from a table run by the excellent Daughters of St. Paul. I did not stay for the Mass offered by Bishop Murphy but overall it was a great day. I am glad to see it was a successful event as this is something that is obviously needed in the Church. Unfortunately I brought a camera with almost dead batteries so any pictures I took of the speakers came out too dark. If anyone who attended has any pictures I could post please send them. At least I can post these pictures of the Orange County Choppers Custom Pope John Paul II Tribute Motorcycle - 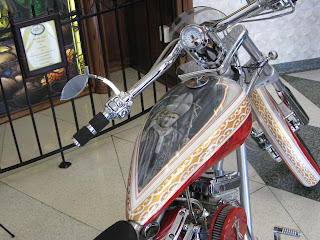 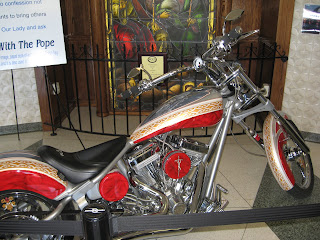