Dr. Thomas Woods Jr. will be speaking on his book "How The Catholic Church Built Western Civilization" on November 2nd from 7 PM to 9:30 PM at Nassau Community College.
Posted by Gen X Revert at 11:04 PM No comments: Links to this post
Labels: Catholic books, Catholic Event, Center for Catholic Studies
For the locals: 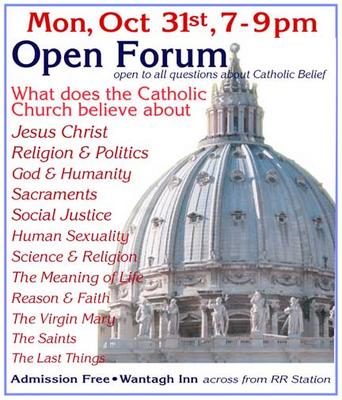 Ann Rice, author, has apparently come home to the Catholic Church, thanks be to God. She may have dropped in on St. Blog's as well.
Posted by Gen X Revert at 10:16 PM No comments: Links to this post
Labels: Blog Stuff
Someone from the Diocese of Rockville Centre looked at Gen X Revert. That could be bad, although their visit time was 0 seconds so maybe I have nothing to worry about. In all seriousness, there have been a few times when I have been surprised to be told by someone that they read my blog. Gen X Revert is anonymous so how do they find out I am me? Anyway, it always shakes me up a bit because I always think about what I write and whether it was uncharitable, stupid, wrong, or mean. I always have to remind myself to watch what I write, mainly because my sense of humor is sharp. Please keep in mind that my blog is just a hobby, a personal thing and if I ever write anything that strikes you as unChristian (not just sharp criticism, etc..) please let me know.
Posted by Gen X Revert at 9:40 PM No comments: Links to this post
Labels: Diocese of Rockville Centre
Staying The Course With Benedict XVI in a Post John Paul II Church: An Intellectual Celebration of Two Great Catholic Historical Figures

Cardinal Dulles' talk was mainly a rundown of JPII's Pontificate focused on his attempts to correctly put Vatican II into action. He pointed out the 1985 Synod of Bishops spoke of interpreting the Council in light of tradition, something that was frequently missing in the 1970's-1980's. He noted the Pope's first encyclical Redemptor Huminis striked the opening chord of JPII's Papacy: that all salvific work of the Church is tied to the rights of man. This made Christian Humanism the theme of the Papacy, that freedom is tied to truth and reason. If freedom is misused, then man becomes a slave to sin, which in turn diminishes freedom. This is all based on my notes, so please excuse any mistakes or misinterpretations. Cardinal Dulles said a major part of JPII's Legacy will be the Theology of the Body, that marriage images the union of Christ and the Church.

Fr. Massa gave a good response which focused on John Paul II's governance of the Church. He focused on 3 main areas that he felt should receive more attention under Benedict XVI.

Posted by Gen X Revert at 1:50 PM No comments: Links to this post
Labels: Church Stuff

A short article from a teacher at Kellenberg found on the LifeTeen website.
Posted by Gen X Revert at 10:30 PM No comments: Links to this post
Labels: Diocese of Rockville Centre

I didn't realize that Brother Hoagland, principal of Kellenberg High School, was on The O'Reilly Factor discussing the cancellation of the senior prom. O'Reilly (Chaminade class of '67) interrupted Hoagland (Chaminade class of '78) a few times but overall was pretty tame. The video and transcript are both available here.

The prom decision was also discussed on the Tucker Carlson show, with Carlson suggesting Brother Hoagland was jealous of the students. He later wrote:

"As for the principal of the school, Brother Kenneth Hoagland, he's worse than I'd realized. Hoagland has refused to meet with upset parents, on the grounds that he's got nothing more to say about the prom. Yet this morning, there he was, basking in his 15 minutes on Good Morning America. What a creep. Is my criticism of Father Kenneth "a direct hit on the Catholic Church"? Only if his behavior is typical of church leaders. And I can't believe it is. "

Carlson's bowtie must be too tight because he is way off here.
Posted by Gen X Revert at 11:57 PM No comments: Links to this post
Labels: Diocese of Rockville Centre
Staying The Course With Benedict XVI in a Post John Paul II Church: An Intellectual Celebration of Two Great Catholic Historical Figures

I was able to attend part of this conference of the Nassau Community College Center for Catholic Studies on Saturday morning. I heard Cardinal Avery Dulles speak and Fr. James Massa give a response. The topic was "The Legacy of Pope John Paul II". Fr. Fessio was unable to deliver his talk since he had to stay in Naples, Fla. at Ave Maria for the impending hurricane. I had to leave before Kenneth Whitehead gave his talk which was "The Prospects of a Benedict XVI Pontificate". I attempted to take some notes which I will post but have been out of practice for quite some time. Perhaps the many Kellenberg and Chaminade students who attended took better notes. (Some of the brothers and priests from these schools were there, including Brother Kenneth Hoagland of Senior Prom fame). Overall, this was an excellent conference and it was very well put together by Dr. Joseph Varacalli, one of the most gracious men I am lucky enough to know. His new book called The Catholic Experience in America will be published around 11/30/05.
Posted by Gen X Revert at 2:11 PM No comments: Links to this post
Labels: Catholic Event, Center for Catholic Studies, Church Stuff
Newer Posts Older Posts Home
Subscribe to: Posts (Atom)