Rejoice, O earth, in shining splendor,
radiant in the brightness of your King!
Christ has conquered! Glory fills you!
Darkness vanishes for ever!

Rejoice, O Mother Church! Exult in glory!
The risen Savior shines upon you!
Let this place resound with joy,
echoing the mighty song of all God's people!

My dearest friends, standing with me in this holy light,
join me in asking God for mercy,
that he may give his unworthy minister
grace to sing his Easter praises.

The Lord be with you.
And also with you.
Lift up your hearts.
We lift them up to the Lord.
Let us give thanks to the Lord our God.
It is right to give him thanks and praise.

It is truly right
that with full hearts and minds and voices
we should praise the unseen God,
the all-powerful Father,
and his only Son, our Lord Jesus Christ.

For Christ has ransomed us with his blood,
and paid for us the price of Adam's sin
to our eternal Father!

This is our passover feast,
when Christ, the true Lamb, is slain,
whose blood consecrates the homes of all believers.

This is the night when first you saved our fathers:
you freed the people of Israel from their slavery
and led them dry-shod through the sea.

This is the night when the pillar of fire
destroyed the darkness of sin!

This is the night when Christians everywhere,
washed clean of sin
and freed from all defilement,
are restored to grace and grow together in holiness.

This is the night when Jesus Christ
broke the chains of death
and rose triumphant from the grave.

What good would life have been to us,
had Christ not come as our Redeemer?

Father, how wonderful your care for us!
How boundless your merciful love!
To ransom a slave
you gave away your Son.

O happy fault,
O necessary sin of Adam,
which gained for us so great a Redeemer!

Most blessed of all nights, chosen by God
to see Christ rising from the dead!

Of this night scripture says:
"The night will be as clear as day:
it will become my light, my joy."

The power of this holy night
dispels all evil, washes guilt away,
restores lost innocence, brings mourners joy;
it casts out hatred, brings us peace, and humbles earthly pride.

Night truly blessed when heaven is wedded to earth
and man is reconciled with God!

Therefore, heavenly Father, in the joy of this night,
receive our evening sacrifice of praise,
your Church's solemn offering.

Accept this Easter candle,
a flame divided but undimmed,
a pillar of fire that glows to the honor of God.

Let it mingle with the lights of heaven
and continue bravely burning
to dispel the darkness of this night!

May the morning Star which never sets find this flame still burning:
Christ, that Morning Star, who came back from the dead,
and shed his peaceful light on all mankind,
your Son who lives and reigns for ever and ever.
Amen.
Posted by Gen X Revert at 8:34 AM No comments: Links to this post
Labels: Church Stuff

I started this blog because I wanted to share my experiences and thoughts on being a "revert" to the Catholic Church. I had pretty good experiences growing up Catholic and wanted to make that known, since so many people seem to have a problem with Catholicism and/or the Church. I never thought this little corner of the internet would see me rolling in freebies. Well, actually there have only been two, but it was nice to be noticed. The first was an invitation to a free screening of the movie Millions by Fox Searchlight. The film features a young Catholic school boy who finds money and wants to spend it by helping people. During the film he has conversations with various saints. Here is the review at Decent Films. The film is by Danny Boyle who did Trainspotting and it looks good. The opportunity to view a film before it opens, a film that has Catholic things running through it, in Manhattan, for free was too good to ignore. The weather was not cooperative however and I didn't get to attend. I would like to see this film though and perhaps I will see it within the next week.

The other thing I received was a copy of Swimming with Scapulars: True Confessions of a Young Catholic by Matthew Lickona. It is a memoir by a tradition-minded Catholic. He works as a wine reviewer, has four children and attended Thomas Aquinas College. The book is good and I think many young Catholics would recognize themselves in the book. There are a few surprises, including an encounter with a pervert priest that did not manage to shake Lickona's faith. Check out the author's website which (surprise!) includes a blog.

Nice to see a couple of things in this culture that present Catholicism in a positive light. Now I am thinking of starting a blog about wine or food to see if I get any freebies....
Posted by Gen X Revert at 6:00 PM No comments: Links to this post
Labels: Blog Stuff
No humanity in starvation

This is a strong editorial by Cathy Cleaver Ruse of the USCCB printed in Newsday.

And here is a succinct and powerful piece from a Franciscan Friar of the Renewal that never mentions Terri Schiavo by name.

"The drama which we recall this Holy Week is being lived out today – and everyone is present in the praetorium. Let us pray that this time God protects the innocent from injustice and strengthens those in authority so that by the grace of God, Pilate’s choice may not be repeated."
Posted by Gen X Revert at 5:47 PM No comments: Links to this post
Labels: Culture
A STATEMENT FROM BISHOP WILLIAM MURPHY

Catholic moral teaching and Terry Schiavo
Posted by Gen X Revert at 5:40 PM No comments: Links to this post
Labels: Diocese of Rockville Centre
Nun won't turn the other cheek in firing

"Riordan said she always kept an open mind when she counseled students of all religions and many nonbelievers on tough issues such as abortion, gay rights and premarital sex.
The nun fears her replacements will be less available to students and that the young clerics' more conservative views could turn troubled students away."

In the Long Island Catholic the story is presented as an attempt to make campus ministry part of the New Evangelization. Fr. Brian Barr talks of "dynamic Catholicism and dynamic orthodoxy" being a goal so this all sounds good.
Posted by Gen X Revert at 2:03 PM No comments: Links to this post
Labels: Diocese of Rockville Centre

The next sessions of Faith on Tap will feature John Zmirak of Godspy (March) and Bill Donohue from the Catholic League (April). I think these will be our best talks yet: 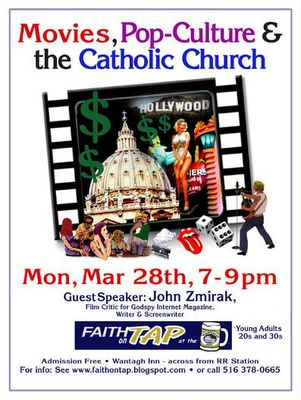 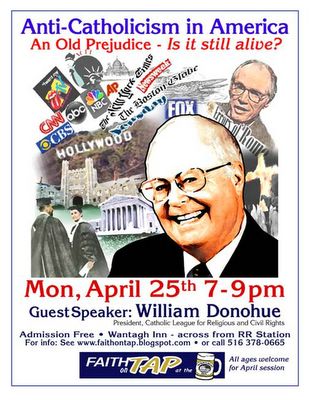