Two popes prayed together Friday at the Vatican, one Catholic and one Orthodox, in a sign of improving ties following the election of new leaders for both churches.

Pope Francis welcomed the head of the Coptic Orthodox Church of Egypt, Pope Tawadros II, in the first such meeting at the Vatican in 40 years, saying his visit "strengthens the bonds of friendship and brotherhood" between the two churches.

The Coptic and Catholic churches split in the fifth century over theocratic differences.

Christians comprise about 10 percent of Egypt's population. The Coptic Orthodox Church of Egypt counts about 10 million faithful, while the Coptic Catholic Church in Egypt — whose faithful are loyal to Pope Francis — counts about 165,000.

Both, however, have complained about increased discrimination and attacks against them since the 2011 overthrow of longtime Egyptian ruler Hosni Mubarak, especially with the rise of Egypt's Muslim Brotherhood."

Read the rest of this article with some pictures of the two Popes exchanging gifts.  Since Pope John XXIII and the Second Vatican Council the Church has had improved relations with other Christians.  It is good to see old rifts healed a bit, so hopefully we will see the Church 'breath with both lungs' as Pope John Paul II said.

Pope Tawadros shows Pope Francis how to be gangsta with some bling: 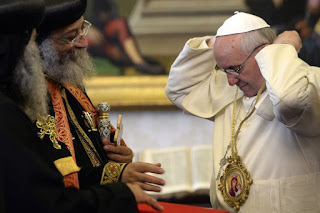