The Latin Mass Magazine has introduced me to numerous Catholic people and historical events but unfortunately their articles are mostly unavailable online.  It is well worth subscribing to the magazine anyway because the layout and quality are very good.  The articles remind me of why I love Catholic history, culture and tradition.  One such event I learned about through the magazine's most recent edition is the Shimabara Rebellion.

"The Shimabara Rebellion was an uprising in southwestern Japan lasting from December 17, 1637 to April 15, 1638, during the Edo period. It largely involved peasants, most of them Catholic Christians.

...Religious persecution of the local Catholics exacerbated the discontent, which turned into open revolt in 1637. The Tokugawa Shogunate sent a force of over 125,000 troops to suppress the rebellion and after a lengthy siege against the rebels at Hara Castle, defeated them.

Statue of Amakusa Shiro, the rebellion leader who was only 16 years old. 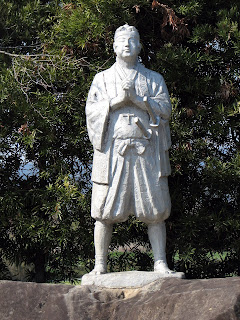 Shiro's battle flag, which states Worship and Adore the Most Holy Sacrament (more details on the flag can be found here) 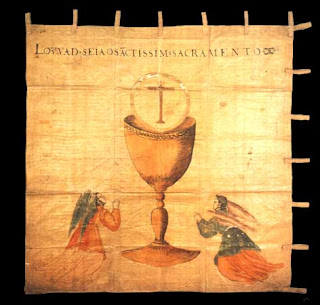